The first narrantor I ever met was Misindi Maliyehu. A student at the the University of Venda, Michael Madzivhandilal, offered to take me to meet a narrator. At the first hut the children screamed and yelled “Makhuwa! Makhuwa! White thing, white thing!” and disapeared. Doors slammed. The same thing happened at the next grandmother’s hut, “Makhuwa! Makhuwa! White thing, white thing!” Children, mothers and grandmothers dashed away, except for one smiling woman under a tree.

“This is my grandmother’s sister, Masindi Maliyehe,” said Michael. Masindi took both my hands in hers and greeted me in TshiVenda. Michael explained that I did not understand Venda, he would translate. That however never stopped Masindi. Looking me in the eye she nattered away so that Michael often had to shout “Please stop, stop! You talk too fast and say too much! Let me first explain to the Makhuwa who cannot understand our language.”

On that day a wonderful new world opened up to me, an ancient world of old Venda stories, a world of gracious Venda woman with a unique cultural treasure, quite willing to share their time and stories with a total stranger.

Masindi told me only one story and, being new at this, I never thought to ask her for her life story. But I will always remember the gracious, smiling woman who welcomed the Makhuwa.

“The Tortoise in the Year of Drought”

This story has not been embroidered but is in the pipeline. 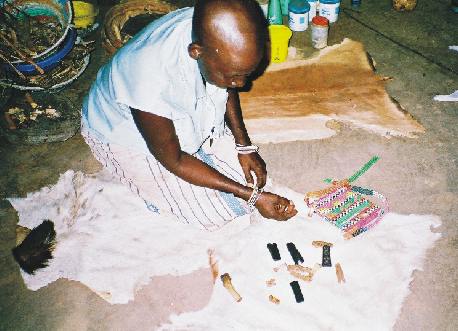 Masindi is a nanga, a traditional healer