Once upon a time there was a little orphan boy called Mashudu who lived with his grand parents. His grandparents were very old and very poor and often they did not have enough to eat. Mashudu however understood the African bush very well and knew exactly where to find wild fruit.

One day he found a wild fig tree full of ripe figs. He climbed into the large tree and made himself comfortable on a thick branch and ate and ate. Suddenly he heard a strange noise. He peered down and what did he see? Here right under him stood a huge grey elephant.

“Little boy, you are having such a nice meal, please drop some fruit down for me too,” said the elephant. Mashudu was rather scared but he dropped a handful of fruit for the elephant.

“More, little boy, more. Remember I have a big stomach and I am very hungry.” 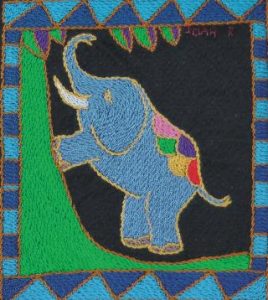 “Bring your hand a little closer little boy, still closer so that I can eat from your hand.” Then Mashudu realized this elephant did not want to eat wild figs, this elephant wanted to eat him. How on earth was he ever to escape from the clutches of the elephant?

“More fruit little boy, throw down more fruit!” cried the elephant. Suddenly the elephant grabbed at Mashudu’s leg, but missed. Mashudu got a big fright. “What on earth am I going to do?”

It was a very simple song, but Mashudu could not think of anything else. What happened?  At first the elephant shook his ears at the rhythm of the song, later his head swayed from side to side. At last he started to dance round and round and round the tree. Mashudu could not believe his eyes. He sang louder and louder. The elephant danced so wildly that a thick cloud of dust covered the tree.

When the cloud of dust was so thick you could hardly see in front of you, Mashudu quietly slipped down and ran away.
The elephant danced slower and slower, then stopped.

“Where are you little boy? Little boy?” He called but there was no reply.

He shook his head and walked off.

This folk tales portrays the fate of orphans who are too young or weak too defend themselves against adult relatives, here represented by the intimidating elephant. These relatives exploit the vulnerability of the young to appropriate their inheritance. The clouds of dust caused by the elephant’s feet represent the arguments that ensue over a deceased’s possessions. The song is quite meaningless because the boy is too nervous to remember the correct words.

Traditionally women and children are powerless, and they find relief from their frustrations in the sharing of their common problems in the telling of these stories.