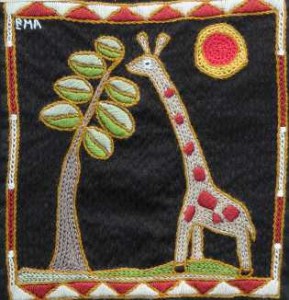 Once upon a time there was a little boy called Tshimbeloni who lived with his grandparents. His grandmother was very old and very blind, but she could still make a fire, stir porridge, find vegetables and collect firewood. His grandfather was a woodcarver and used sharp tools to make shining animals; giraffes, elephants, hippos, birds, spoons and knopkieries. One day a terrible thing happened. While Tshimbeloni helped his grandmother in the kitchen hut he stumbled and fell face down into the fire. It was a terrible accident. His grandfather pulled him out of the fire, they ran with him to the clinic and everybody cried and wept. Tshimbeloni spent a year in a far-away hospital but when the ambulance brought him home he was a boy without a face.

So Tshimbeloni stayed another year at home and collected firewood for his grandmother, he brought water from the river and helped his grandfather with many small things that a boy can do.

“I still do not want to go to school,” Tshimbeloni said the following year but his grandfather answered, “You cannot stay another year. I’ll make you a face out of wood. It is true you haven’t got a face, but you’ve got a brain. Let’s go and find a log to make you a face.” 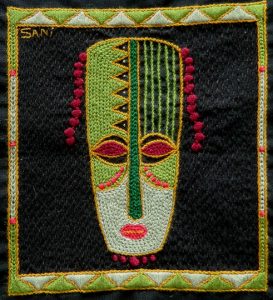 “You are very silly,” the beautiful girl said, “I love you when I see how you care for your weak grandmother and when you carry logs for your grandfather and bring water and cut firewood and nurse the sick goats and dogs back to life. I don’t only love a face.”

Then a wonderful thing happened. A new doctor came to the clinic and asked Tshimbeloni whether he could operate on him. Again the ambulance took Tshimbeloni to a far-away hospital. Again it took a year, but this young docto gave Tshimbeloni two lips and a new nose and even a new left ear plus a cheek.

When Tshimbeloni returned home he carried his mask wrapped up in sackcloth under his arm and went to each one of his friends and said: “May I introduce myself, my name is Tshimbeloni.”
And what about the beautiful young girl, you ask?

Well, you’ve got a brain, haven’t you?

Interpretation
There is always a fire smouldering in the middle  of the kitchen hut where the young children and babies play while the mother is preparing food. Sometimes a child falls into the fire and, if he survives, is horribly disfigured for life. This story deals with such a little boy and how the grandfather makes a plan until a kind doctor intervenes.