A Child of Clay 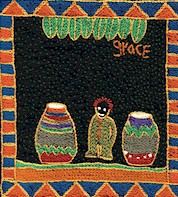 Once upon a time there was a Venda potter who lived on the banks of the Mutshindudi River. Every morning Matodsi (her name means tear drops) went to the river where she found soft red clay to make shiny red clay pots. Although Matodsi worked very hard she could not forget the great sadness in her heart: she longed to have a child.

“What if I were to make a child of clay?” Matodsi said to herself.

That day she made a child of clay. When she combed his hair he suddenly came alive. 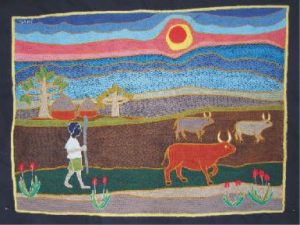 Now Matodsi had a child. She called him Mbungwa and gave him a flute so that she could always hear where he was. Mbungwa became a herd boy. Every morning he took the cattle out to graze in the fields. 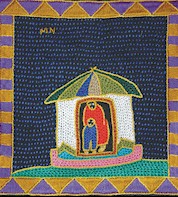 “Mbungwa,” Matodsi said, “you must be very careful. When you see rain clouds, run home quickly with the cattle. You must never get wet.” One afternoon Matodsi saw great white clouds gathering. She climbed onto the highest ant heap and called Mbingwa back. There in the distance she could hear him playing on his flute. As the rain drops started to fall Mbangwa and the cattle arrived safely. Matodsi and Mbungwa ran to the hut and watched the rain coming down.

The next afternoon the big white rain clouds gathered even earlier. Matodsi ran to the ant heap and there far, far away she could hear him playing his flute. “Mbungwa, Mbungwa come home, come home quickly!” Matodsi called. 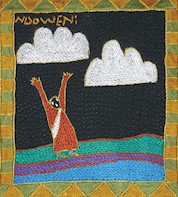 It was already raining softly when Mbungwa and the cattle arrived home.

From the kitchen hut they watched the rain coming down.

The next day Mbungwa took his cattle even further away. Matodsi saw the rain clouds gathering and a cold wind started blowing. From the top of the ant hill Matodsi called and called. Great drops of rain began to fall. She couldn’t hear the flute; she could only hear the thunder. There in the distance Matodsi saw Mbungwa driving the cattle home as fast as he could. As he reached the kraal the rain came down in torrents. Matodsi ran towards her son, but she was too late. When she reached him he had already dissolved. He had returned to the earth he was made of.