A Woman and her Bird 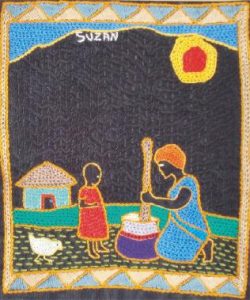 Once upon a time there were an old Venda man and his wife living near the Limpopo River. Every morning the old woman took the water pot and made her way down to the river to fetch water. She was getting on in years and it was not easy making her way back up the steep river bank with the water pot filled to the brim.

“Please give me permission to marry a second wife,” the husband said. “I’ll choose a strong young wife. She can help you chop wood, work in the garden and every morning she can go to the river to fetch water.”

The wife gave permission and it took quite a while for the old man to find a young woman willing to marry him and to live in this faraway spot under huge wild fig trees on the banks of the Limpopo river where you could hear elephants trumpeting during the night.

The young wife brought her own claypot with her which she kept behind the door of her bedroom hut. Soon there was trouble between the first wife and the young second wife: “Why do you spend such a long time at the river when I send you to fetch water?”

The young wife just smiled and walked away. 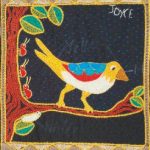 At last the first wife and her husband went to the diviner to ask his help. They took a chicken with them for payment but the diviner said, “This is a very difficult case, bring me a goat.”

The husband took a goat along the next time when they visited the diviner.

“Now this is what you have to do,” the diviner said to the husband, “get up very early and go to the river and hide in the bushes where the women fill their pitchers. Watch carefully and see what happens at the river.”

The old man did just that and when the young wife put down her water pot, to his amazement he saw that she lifted the lid and out flew the most beautiful bird he had ever seen. The bird settled on a branch and started singing. The young woman sat down and could not keep her eyes off the beautiful singing bird. Time went by and suddenly realising it was very late, the young wife jumped up, filled the water pot and hid the bird under her skirts. 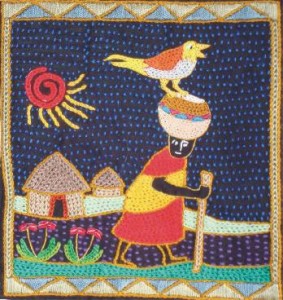 At home she emptied the water into the large water pot and behind the bedroom door she put the bird back into the clay pot.

The husband went back to the diviner and told him what he had seen.

“For this advice I need two goats.” The husband brought two goats.
“Now this is what you do, kill the bird.”

That night the husband told everything to his first wife, but because she was a bit deaf he had to speak in such a loud voice that the young woman and the bird heard eveything.

The next morning when the husband and his first wife woke up they found the young wife all packed and ready to leave. The beautiful bird was sitting on the lid of the pot.
“I cannot stay here anymore. You plan to kill my beautiful bird. This bird is as close to me as a child.”

The young woman walked away.

This is the end of the story.

1 thought on “A Woman and her Bird”