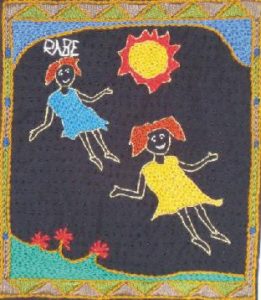 Once upon a time there was a Venda king who had five adventurous but very disobedient daughters. Every morning the five daughters went to fetch water in the nearby Mudasiri River. One morning, while they were filling their water jars and splashing in the shallows of the Mudasiri River a young man appeared. He had a  musical bow with him. He played on the bow, sang a song and danced in front of the girls.

“Do you think you could fall in love with me, young ladies?” he asked.
“What a silly fellow,” they said. 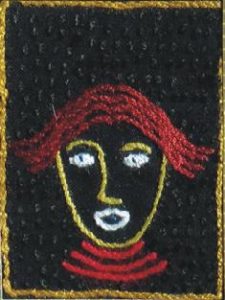 “What do you think, dear ladies, can anybody fall in love with me now?”
“Good heavens,” they said, “you are insufferable, just get lost.”
“Wait a minute,” one of the daughters said, “I quite like the fellow.”
“Then come with me,” the young man replied.

Not wanting to let one sister follow the young man all by herself, they all decided to go along with him. The young man was very pleased with himself as he walked in the footpath, playing on his musical bow, singing a song with his hat on his head and behind him five beautiful young ladies. They followed footpaths, down valleys, through dark forests and at last they arrived at the young man’s homestead where he introduced the five ladies to his family. After a good meal they all went to bed. That night the girls woke up with a start. They heard something growling outside the hut.

The next morning they said,”We heard something growling outside our hut, last night.”
“Perhaps you had a bad dream,” the young man said.
The next night they were too scared to fall asleep and deep in the night they again heard growling right outside their hut.
“This is a dangerous place, lets run away.”
They crept  out in the dark, followed a footpath but by noon they knew they were hopelessly lost. 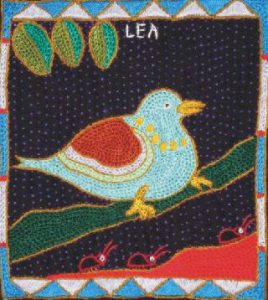 “Are there any children missing, oh King?” asked dove.
“Oh no, they are all back,” said the king.
“How shall we reward the dove for bringing back our children safely?” Whispered the king’s wife to her husband.
“Oh well, give him a small bag of grain.”
“Only a small bag?”
“Only a small bag. I know I should be grateful that all five daughters are back but they are such a nuiscance to me, what will they do next?”

They gave dove a small bag of grain and he flew off.

This is a straight forward warning to daughters not to be too adventurous and not to go off with strangers no matter how interesting or attractive. In this story we have two male figures, the chancer and the saviour – the dove.